You are here: Home / Blog / Weightlessness and Vodka Was Making Me Happy

I dreamed that a girl and I bought a bunch of vodka and went hiking in the Hollywood Hills.  I took a lot of effort because we weren’t prepared, were carrying simple water bottles.

When we get to a shed, we met a lady doing some gardening in the middle of the night and she greeted us. We tried our best to hide and conceal the fact that we’d been drinking by the water bottles in our pockets. I managed to wedge me vodka bottle in some tree roots.

The lady was nice and looked like the wife from the movie American Splendor. The house resembled Brian Strachen’s house and was positioned on to of Mulholland with a view of Topanga Canyon…but it wasn’t Topanga Canyon. Instead, it was a crater where people started living.

She took us inside and showed us a room where we’d be staying should we decide to accept her offer.  Looking out the window was awesome.  Expensive model homes positioned throughout the crater. When we were looking out the window at the lady’s house, I said, “when I get a house, I’m going to get it built around here.”

Through one of the windows I could see my family. My father was talking with Isaac Brock from Modest Mouse and his two brothers. They all had really bad haircuts that resembled the mullet sported by the tennis guy in Gummo. They were talking about replaying my place in the family. It was very distressing…perhaps the reason why I was getting drunk in the first place. I could tell that Isaac knew we were watching him from our eagle’s eye view. We left and continued on our way.

When we finally get to the spot where we planned to jump, I realized that I had forgotten my bottle of vodka. So I ran all the way back and searched for the bottle wedged in the tree roots.  We drink the vodka and jump off the mountain. I expected to do a lot of rolling down the mountain, but instead we were falling through the sky. It was a pleasant feeling.

Weightlessness and vodka was making me happy.

From our airplane we were following Isaac and his brothers. I thought, “It is so obvious that we’re following him.” Even though we were using a tracking device on his plane, we were only one “car space” away. It appeared as though we were Betty and Wilma in a jet plane.

We arrived in Paris, France and continued to follow, Isaac and his brothers. Then, I am alone and riding the metro to some tower like apartments. I think I’m looking for Philippe Lenglet**, but everything is closed. 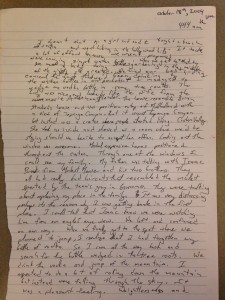